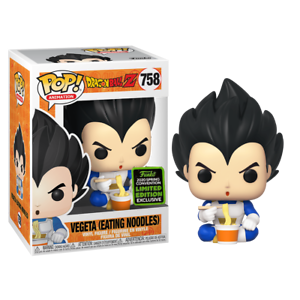 It's not easy bein' green, it seems you blend in with so many other ordinary things. Well have no fear because Funko are ensuring this year’s Emerald City Comic Con is an exception to the rule with their exciting wave of 2020 Spring Convention Exclusives! Featuring characters from some of the most iconic movies and television series, this wave has a little sumthin’ sumthin’ for everyone.

Here we have Vegeta, sitting down and gorging on noodles as he prepares for the World Tournament. At least it makes sense, Vegeta is going to need all the energy he can muster to compete, whereas someone like myself who only gets up to get a snack from the fridge, perhaps noodles should only be a "sometimes" food.