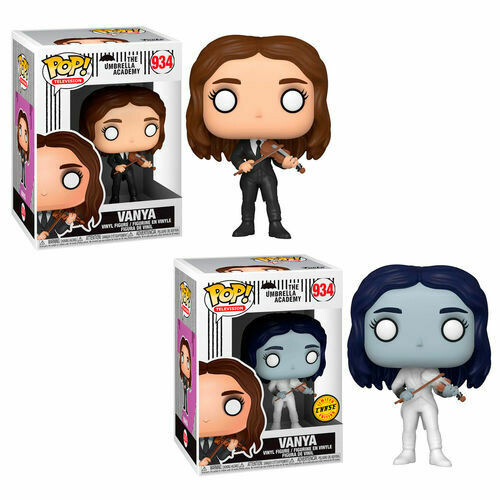 It's one of the hottest shows on Netflix, and now the heroes of The Umbrella Academy are ready to bring their brand of superhero shenanigans to your Funko collection!

On one day in 1989, 43 infants are inexplicably born to random, unconnected women who showed no signs of pregnancy the day before. Seven are adopted by billionaire industrialist Sir Reginald Hargreeves, who creates the Umbrella Academy, preparing his "children" to save the world. However in their teenage years the family fractures and the team disbands. Fast forward to the present time, the six surviving members of the clan reunite upon the news of their father's passing and work together to solve the mystery surrounding his death.

Funko's enormous new wave of The Umbrella Academy Pop! Vinyl Figures features a plethora of characters from the show, including; Luther (Number One), an astronaut with super strength, Diego (Number Two), a rebellious troublemaker with the ability to curve the trajectory of anything he throws, Allison (Number Three), a celebrity with the ability to control minds with the phrase "I heard a rumour...", Klaus (Number Four), a flamboyant drug addict with the ability to communicate with the dead, Number Five, a boy with the ability to jump through space and time, Ben (Number Six), a boy who can summon tentacled horrors from his body, Vanya (Number Seven), a meek violinist with no apparent supernatural abilities...or so we think. On top of all of heroes, we also get the Pogo, who is certainly smarter than the average chimp, as well as the two evil assassins Cha-Cha and Hazel with their masks. Look out for the chase pieces of Vanya and Number Five!

Price is for a box of 6 including 1 Vanya Hargreeves Chase and 5 commons.

Yes, this will guarantee 1 Chase in the box